Fifty indigenous artists from around the world express their individual and group interpretations of shared experiences involving nuclear hazards.

It seems there is little that unites us and much that divides us as citizens of this planet.

Unfortunately, a big thing that does unite people across the world, especially indigenous people, is exposure to one form of nuclear catastrophe or another, especially above ground nuclear testing, and irresponsible uranium mining. To that point, the Institute of American Indian Arts Museum invited indigenous artists from as close as the Navajo Nation, and as far away as Australia and Japan to offer up their responses – their artistic responses – to the impacts of nuclear testing, nuclear accidents, and uranium mining on native peoples and the environment.

The exhibit, Exposure: Native Art and Political Ecology opened August 20th, will run until next July. More than 50 artists are participating in a variety of artistic mediums.

Manuela Well-Off-Man: And it all started in 2017-18. This visit of one of my co-curators, his name is Kóan Jeff Baysa, and he's a medical doctor. At that point, I was still new at the museum and I was thinking about an exhibition where I could include international indigenous artists, and I was thinking about potential themes, things they have in common. So when Kóan Jeff Baysa came to MOCNA, he suggested a collaboration, an exhibition, where we feature artists from Guam, the Marshall Islands, and New Mexico.

And he explained, both indigenous communities share a nuclear history or actually, it's a nuclear present because the problems never disappeared.

On the Marshallese Islands, Indigenous people were removed, forcibly removed. We had atomic bomb tests in the Pacific. And similarly here, our Pueblo communities and the Navajo Nation, Indigenous communities are exposed to nuclear radiation because there are many uranium mines on Navajo Nation. Close to the Laguna Pueblo, we had the world's largest open pit mine.

So, Native Americans here in New Mexico, there are not only exposed by atomic bomb tests, but also the uranium mines. And many of your listeners probably remember, the first atomic bomb was developed in Los Alamos. Because of that, people who live close to the test site also developed cancer.

KSFR: The artists, were their paintings and such done for this exhibition? Or had many of them already done their art previously?

Manuela Well-Off-Man: That's a good question. The majority of the artworks were created a prior to the exhibition. They were only a very few pieces of art – as a diptych, two panels by Mallery Quetawki, who is a member of the Zuni Pueblo, there is also instead a large installation piece created by Alexander Lee who is Hakka Chinese and from Tahiti. That is also a brand of recent installation pieces created specifically for MOCNA. But the rest the are all artworks artists created in the years before we opened the exhibition.

KSFR: How many countries are represented?

Manuela Well-Off-Man: So we have invited artists from Greenland, we have, as I mentioned, Alexander Lee, he is Hakka Chinese from French Polynesia or Tahiti. And then we have a large group of artists from Canada and also from Australia and then the Pacific Islands, like Guam, and American Samoa. So really an International exhibition. Here from the United States, we have artists from New Mexico, from Arizona, and the state of Washington.

We have over 50 artists and a large group. Actually, It's a collaborative project that comes from Australia. So on this art collaboration, about 20 artists work together to create a large installation of over 550 handcast wooden spears. It is a major installation piece and it addresses a serious problem – the atomic bomb test in Maralinga and Emu Field in Australia.

KSFR: Sometimes, people are aware of the nuclear tests in the United States. But maybe you're not fully aware of testing all around the world...

Manuela Well-Off-Man: It was fascinating to learn how related these issues are. So I mentioned earlier, that the first atomic bomb was developed as part of the Manhattan Project. And early on, there were British scientists also involved that those bombs were tested in Australia, on Aboriginal lands. So, this artists collaborative I mentioned earlier, they created this major installation piece to remind visitors and viewers how dangerous these atomic bomb tests are. So we still have Aboriginal community members who are suffering from illnesses related to radiation.

KSFR: Will Wilson is a photographer and Diné Navajo in Santa Fe. His work in the exhibit consists of a series of aerial photographs of abandoned uranium mines on the reservation taken by drones. He knows the subject very well, because as a child, he played around uranium cleanup sites in Arizona.

Will Wilson: And the Navajo Nation EPA have identified over 521 abandoned uranium mines.

KSFR: What do you hope to accomplish in your art?

Will Wilson: Yeah, well, I'm just hoping to get the word out about the issue. Bear witness to it. And then also, hopefully figure out how to how to reframe remediation in a way that incorporates all kinds of different avenues to think about cleanup. You know, it's not just about burying the stuff with a bulldozer. I think it's about addressing a history of trauma, and the ongoing legacy of this kind of poison on the land.

Will Wilson: Anger. Also sadness. And, a kind of awe about the scale of the problem.

KSFR: A large exhibit like this, with so many people, what can that accomplish?

Will Wilson: Well, for one thing, it gets the word out, it's about bearing witness, you know, on a baseline level, for me anyway, as an indigenous person or an artist, like learning about this, how do I process this? How do I engage this issue without becoming completely nihilistic? You know? And flipping that script and being creative in relation to it.

Is there a way that, you know, artists can dream solutions for really complicated problems? 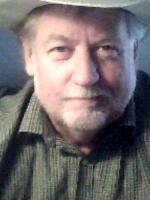