Tom Trowbridge, former KSFR News Director and award-winning journalist, passed away Monday night in his sleep. Tom was a tireless career newsman whose voice was heard starting in the 1980s on stations from the East to the West coast. He led the KSFR news team from 2017 until last month when he left the station and worked primarily with the New Mexico News Network, providing their Capitol reports covering the legislative session. He filed his last report for them Monday.

While at KSFR, Tom won accolades for his reporting. In 2017, he was honored by the Associated Press Television and Radio Association with a second place finish in the Best Daytime Newscast category for his morning news program on KSFR, Wake Up Call. In 2019, Tom received the Associated Press Television and Radio Association's first place award for the Best Daytime Newscast for his Midday News Break program, which he conceptualized and launched for KSFR at the beginning of that year.

Tom is survived by his partner, Polly Shattuck, his daughter, Sam Trowbridge, 30, and his son, Zach Trowbridge, 19. 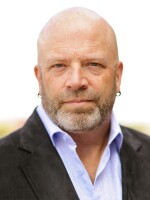 John Shannon
John Shannon is a writer and retired US Army officer with over twenty-six years in the military. He served two tours in Afghanistan—the first in 2005 with 3rd Group Special Forces and again in 2008 with the New York Army National Guard. He is a graduate of Cornell University and he now lives and writes in Santa Fe, New Mexico (USA).
See stories by John Shannon